Nope, I’m not being sarcastic and this is my take on the Google Nest Hub.

I have a Pixel 2 XL, 2 regular Google Home (one in living, one in dining), 1 Google Home Max (in master bedroom), a Google Home Mini (in master bathroom) and a Chromecast Gen 2 (connected to my Onkyo Receiver). Initially, when I knew that the Google Nest Hub doesn’t come with a front camera, I was utterly disappointed. The Google Nest Hub wasn’t available in the Singapore Google Store and I didn’t want to go for Lenovo, JBL or LG made Google Smart Display. So being an ex Apple fanboy turned Google fanboy, somehow I ordered a Google Nest Hub from US unknowingly.

I’ve got a charcoal (dark grey) version and I kinda like charcoal better because my TV console have many other dark coloured stuff. Like many other reviews, my first impression is that it is really small. Just for comparison, I’ve placed a Logitech mouse next to it.

From the side, it looked like a tablet mounted on a speaker.

There is a mute slider on the back and I’m disappointed it is still a custom power connector instead of USB C.

The setup of Google Nest Hub is similar to that of Google Home or Mini.

Swiping down shows your smart devices that are already connected to your Google home as well as all your Google Home devices when you tap on View rooms.

Operating the Google Nest Hub with voice is exactly the same as the regular Google Home devices except that you can ask to play YouTube or Netflix on the tiny screen. Other than swiping left, right and down to navigate, there is nothing much you can do on the Google Nest Hub, except to ask for commute, view reminders, very much as a visual assistant.

Now, the reason I call it a perfect digital photo frame is due to its ambient mode. When your smart display is not being used, it can quietly keep you entertained. You can choose from your favorite albums in Google Photos, enjoy the art gallery, or select from a variety of full-screen clocks to show while your device is idle. 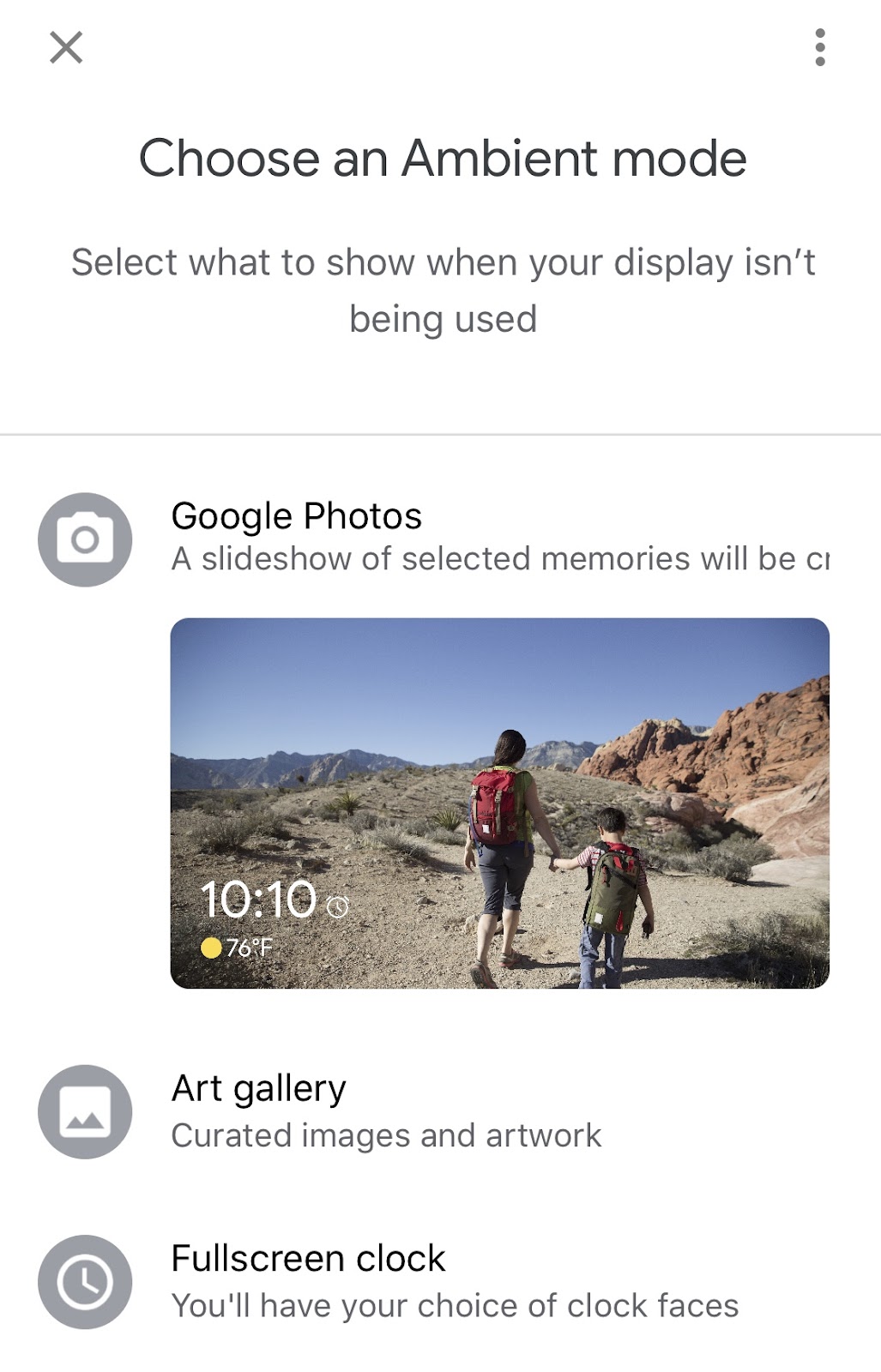 The ambient mode uses a dedicated light sensor to fine-tune the color and brightness of the display based on the surrounding lighting. It is so natural such that you cannot really differentiate between a printed photo and a photo displayed on the Google Nest Hub, even from various angles. You don’t really get that kind of backlight glare from the LCD display that you get from regular digital photo frame because it auto compensate its brightness against the ambient lighting.

I have been using a Pixel 2 XL phone to capture and store all my family photos in Google photos. I’ve also uploaded all my old photos (pre-Pixel era) onto the cloud. The Google Nest Hub has been displaying family photos, including some of my kids when they were babies, on trips and birthdays. You don’t really get to see poorly taken or shaky photos from your album. Somehow Google automatically picks the better ones, bring back the best memories when you least expect it. And when the photos are portrait mode, it displays 2 photos side by side to maximise the screen. Unfortunately, I’m not posting any of my family photo here due to privacy reasons.

Google clearly spent a lot of time designing the Home Hub user experience. That’s why it is not simply a tablet with speakers. The features may be limited but it does what it is supposed to do as a digital assistant at this price (USD 129). I’ve really hoped that it came with a front camera with a mechanical cover, to strike a balance between privacy and maximising the Google Duo feature. The implementation of the ambient mode is a pleasant surprise making it the best digital photo frame. If you have been a Google Pixel user, it further enhances the experience by displaying your best memories when you least expect it.

One last thing. Recently Google has updated the speaker group feature such that all Google Home, Chromecast devices and smart displays can be grouped (you can only group Google Home devices and Chromecast audio only before this update. Regular Chromecast and smart display were not allowed to be grouped). With the recent update, I can finally achieve a true multi-room experience by saying “Ok Google, play spotify on all speakers”.